Salt River Bluegrass Festival is resurrected for 2019 and beyond Posted on June 20, 2019 By John Lawless 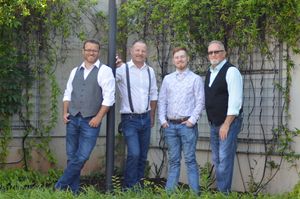 Last year was a sad one for fans of the long-running Salt River Bluegrass Festival in Midland, MI. The event was a dream fulfilled for promoter George Carr, who had run it on his property the past 40 years.

But shortly before the July festival in 2018, Carr was suddenly taken ill and he barely made it long enough to attend his last one. His wife Kris, who had assisted with the festival since it began, announced beforehand that it would be the last for everyone, as she couldn’t imagine continuing without him.

George was able to attend last July, but only lived a short time after. Many friends and bluegrass lovers in central Michigan came to say their goodbyes to the festival, and the man who had made it happen.

And it truly was George Carr who created the festival. He had loved bluegrass music, and longed to put on shows where he could hear, and play, the music he loved. So he bought a 40 acre tract near Oil City, cleared it, built a stage and a shower house, and before long folks were coming with tents and campers to enjoy the pickin’. The first festival was held there in 1978, at what the Carrs called Salt River Acres, and each July since there has been a festival featuring primarily Michigan bands.

Kris didn’t start reflecting on the possibility of continuing until early this year, but once the idea took hold, she was determined to keep it going in George’s honor. After all, she owned the property, so there was no cost to rent a facility, and many people had offered to help if she deduced to do so.

So plans are now set, and a 41st annual Salt River Bluegrass Festival is scheduled to run July 25-27, with camping available on site all week leading up to music on the weekend.

She told The Midland Times that it feels a bit odd getting ready for festival week without George.

“That’s going to be a big, big void to fill,” she said of a bluegrass festival without her husband. “George was the ambassador. He was out in the crowd, talking to people, greeting people, giving little gifts away. He loved it. I’m not sure I’m going to fill those big shoes, but I’m going to try.”

The main change from how things have always been done is that Kris has invited a couple of more progressive bluegrass bands to perform this year. George had been a stickler for only featuring traditional music at Salt River, and that will still remain the largest part of the entertainment offerings next month. Also new this year is a band scramble where pickers are invited to sign up, and then be randomly placed into groups who will have just a few hours to rehearse before going on stage together.

Many of the groups who have been regulars at Salt River will be back this year, like Charlie Lawson & Oak Hill and Bluegrass 101. Kim Robins & 40 Years Late and Branded Bluegrass are also on the bill.

Best wishes to Kris Carr running the festival. Long may she reign!