Bell Buckle Records has announced the signing of Indiana’s Branded Bluegrass to the label, with a new single and video arriving with the news. 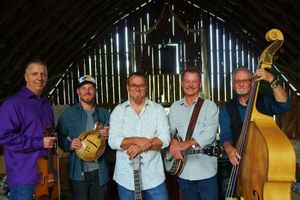 The band is headed by guitarist and vocalist Larry Norfleet, and has been performing for several years in the central US. A number of their previous releases have found favor with bluegrass fans, including this year’s When Charlie Dreams, whose video was honored by the Telly Awards in June. Clayborn Studios, who filmed and edited the video, and Branded Bluegrass were named as Silver Award winners in the Non-Broadcast division of the General-Music category.

Larry and the guys have spent much of 2020 in the studio, completing their second album, which Valerie Smith of Bell Buckle Records says she was happy to snap up.

“It is a pleasure to have Branded Bluegrass on the Bell Buckle Records label. They add a new breath of fresh air in how they present their own style of bluegrass with energy and enthusiasm. They are the best to work with, and it’s always a joy to listen to their music.”

A single from this next album, Mama’s Kitchen Table, is now available. Written by Tim Morgan and Steve Dean, it tells of a humble wooden table that became the focus of family activity in a simple home, with precious memories associated with everyone gathered around stored in a whole family’s recollections.

Branded Bluegrass is a family affair, with Larry on guitar, supported by his brother, Jesse Norfleet, on banjo, his son, Tristen Norfleet, on mandolin, Michael Martin on bass. For the new single, Indiana’s own Michael Cleveland is on fiddle. Tony Wray provides vocal harmony.

Larry says that the whole group loved this song right away.

“From the first time we listened to the demo of Mama’s Kitchen Table, we knew this was a song that we wanted to record. It brought back so many memories from growing up. Memories of Sunday dinners with family, homework, and many late nights with board games and dominoes. Those times seem to be a thing of the past, and family time at the kitchen table just ain’t what it used to be. We hope this song touches others the way it did us and just maybe spark those memories up, so Mama’s Kitchen Table will be the family gathering place once more. Thanks for listening!”

Valerie Smith shot and edited the video, filmed at Greystone Farm near her home in Bell Buckle, TN.